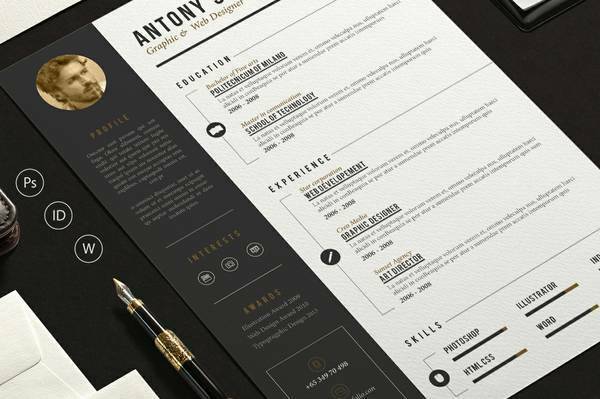 Do any of these apply to you?

X Wasting your time in the black hole of resume death wondering why nobody is calling you back for an interview.

X Wasting your money on buying resume writing books and trying to piece one together or worse paying a low-end resume writer and not getting any interviews.

X Not getting an offer after multiple interviews.

X Not knowing how to transfer your current skills and expertise to a new industry or new role.

X Simply just not knowing where to begin with the requirements of the modern resume world.

If you answered yes to any of these, do not feel bad, as you are not alone.  Good news is… we can fix that!

Acquiring my first major corporate job after graduating college at General Motors was quite easy.  1600 candidates to start, 6 weeks of ongoing interviewing and psychological tests to narrow the group down, 3 hours of final interviews in Detroit at GM’s headquarters… and finally made the final cut of 6 hires.  The problem was that I took a job in California but getting paid Midwest wages ($49k starting base salary). Talk about leaving $ on the table… and who knew California was so expensive to live in?

Next, I failed 2 major interviews to get promoted within GM, one of them at my own plant.  Despite having earned an MBA, I thought I was well positioned for those promotions, but I quickly learned that politics plays a major role in corporate America, and frankly I just wasn’t prepared for those interviews.  I didn’t know how to ‘sell’ my value, despite having championed numerous lean projects saving GM $millions and helping to put our plant in the top five of 28 plants in N. America.

After leaving GM, I took a role with Milgard Manufacturing, where I was happy to increase my base salary over what I was making at GM, but I failed to negotiate a significantly higher salary.  I just didn’t know the art of negotiation yet and unfortunately, that mistake cost me around $25k/year of lost income.

It wasn’t until a few years later that I was at a major life’s crossroads. I had exited from a company that I helped build for 6 years.  The challenge was how to sell oneself after having been an entrepreneur to now transitioning back to corporate America.

I bought a 400-page resume book and a 50-page executive resume book and started to pull various pieces from both of them to create my own resume.  It wasn’t but a week later and I sent the resume off to be reviewed only to have them write back and say, “Where’s the WOW factor?”

My ego was shattered, but I quickly pulled it together.  I started my quest to find out who the top resume writers were that helped write some of those resumes in the executive resume book.

I sent emails, made phone calls, etc. with prices ranging from $800-$3200 for them to write a resume and tweak my Linkedin profile.  Even $800 was outrageous to me, but I made the decision that there’s a reason they are experts, so hire them.  Time is money and I was losing more than $800 every few days by not being gainfully employed.

I settled on a guy named Don who was a graduate of Stanford and also had an MBA from Wharton.  He said, “Geoff, I’m half of what these other people are charging but I’m just as good.” I loved his old fashioned value of calling me and asking what my dream job would look like.

We started off with a 5-page questionnaire, which over the next 3 weeks, I turned into 26 pages of notes; dissecting every single thing about my career.  The type of work environments I thrived in.  The type of people I liked to work around.  The type of work I would love to be doing.  How to position what my MBA had done for me.  How to ‘sell’ my value based on my unique career story.  ETC.

It was then that I truly realized the power of knowing who I was, and what I was capable of.  I was super confident.  No more ego!  I had at least 10 companies a day reaching out to me.  It was magical and exactly how the job market should work.

That $800 investment eventually led me to my next role where I increased my salary by >$50k.

It was that foundation that allowed me to continuously raise my income level, perks package, additional vacation time, etc.  Once you know your value and know the formula, it gets much easier to navigate the job market.

And you know what?  That one woman who charged $3200 to write resumes, I ended up hiring to teach me about personal branding.

As I’ve grown in my career, I’ve interviewed over 1000 candidates for various leadership positions, which has gave me a wonderful perspective and great insights that I use to help others today.

Looking back, I only wish I had learned all of this early on in my career.  I easily lost out on what I estimate to be around $500k of lost income due to simply not educating myself.  Rookie mistake, right? 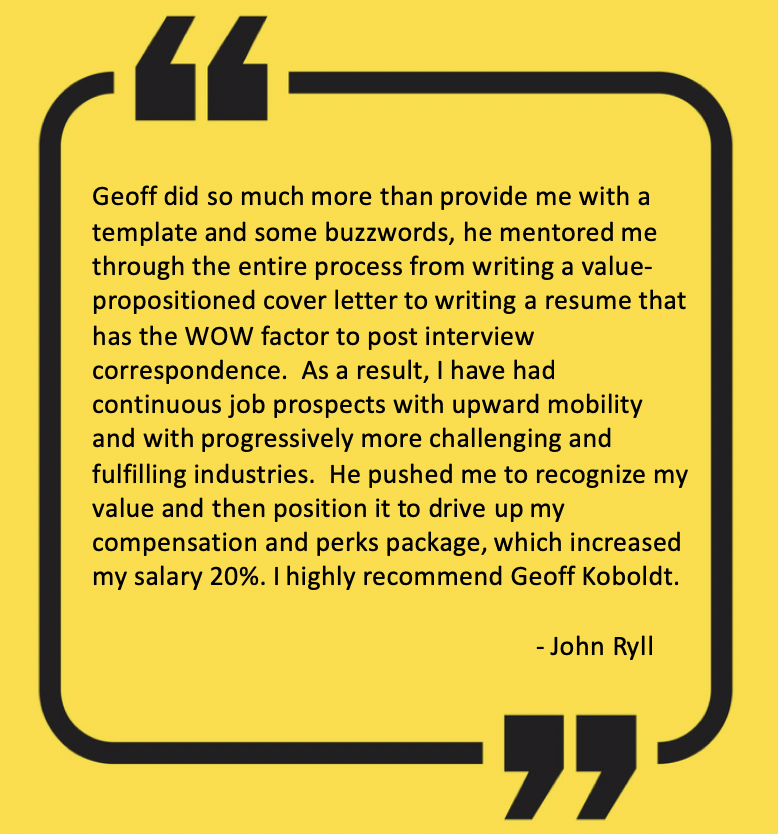 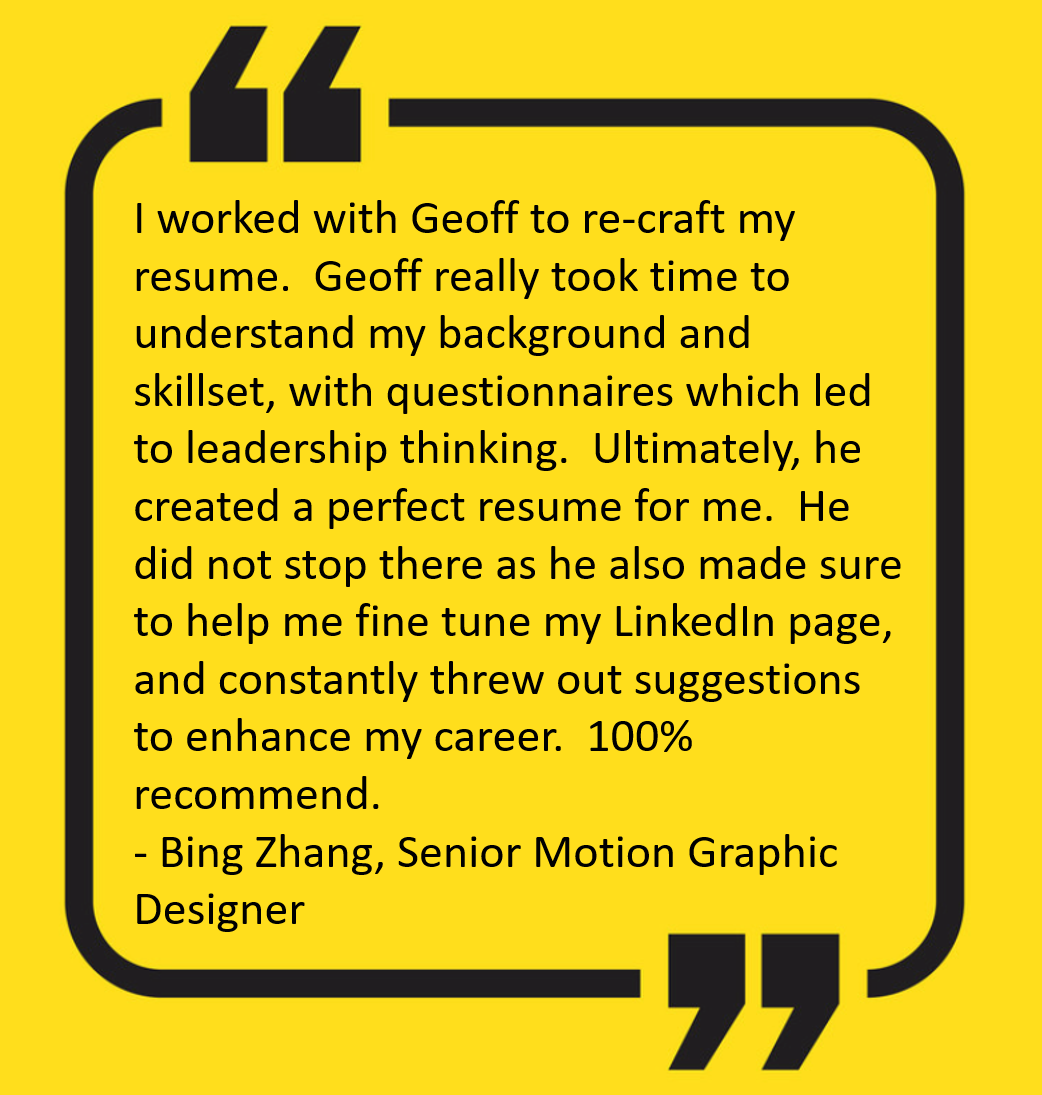 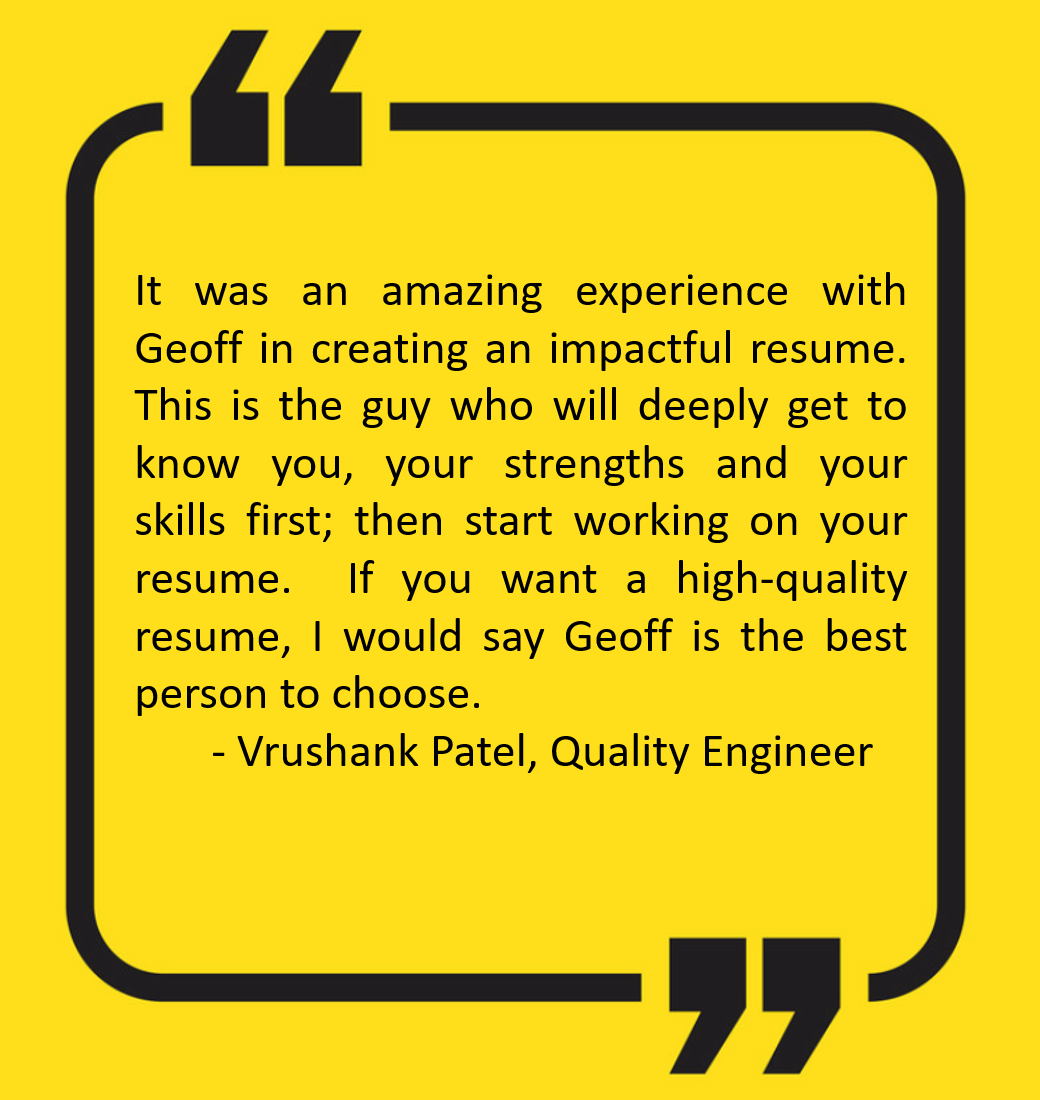 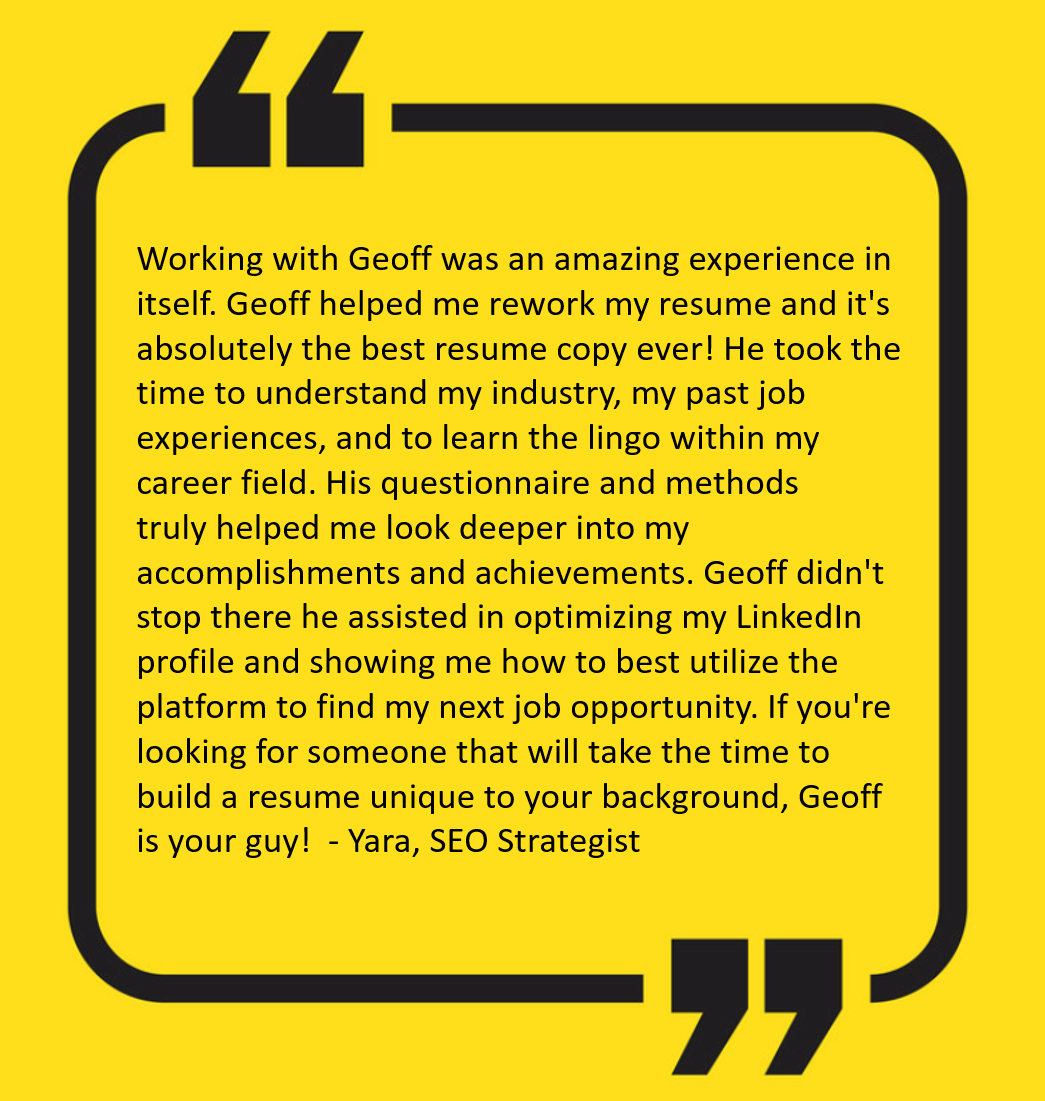 https://calendly.com/gkoboldt Set up 15 minutes for FREE and I’ll demonstrate how I create resumes that have the WOW factor.

A. You fill out an excel file with the top 10 skillsets required for the job you want to get.

B. We drill down the top 3 data-driven results that you’ve achieved for each of those 10 skills, using strong verb tenses and keyword rich content to strike gold with the applicant tracking software (ATS).  This gives you 30 bullet points in the resume to choose from.

C. We’ll evaluate your best 3-5 and use that for your career highlights section at the front of the resume.  This is where you hook the reader!

D.Once I have evaluated all of these results and become familiar with who you are and what you bring to the table per se, I write a UVP = unique value proposition, which is a condensed paragraph at the top of the resume.  This is also where you hook the reader!

All payments secured via Paypal. Paypal.me/koboldt

$50/hour – I will edit your current resume or critique it for you. 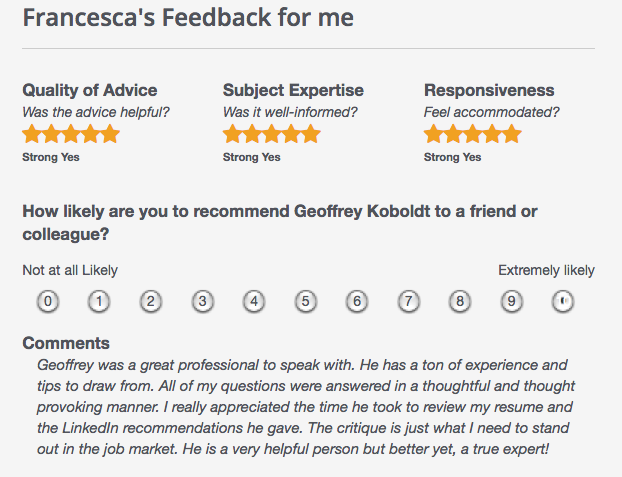 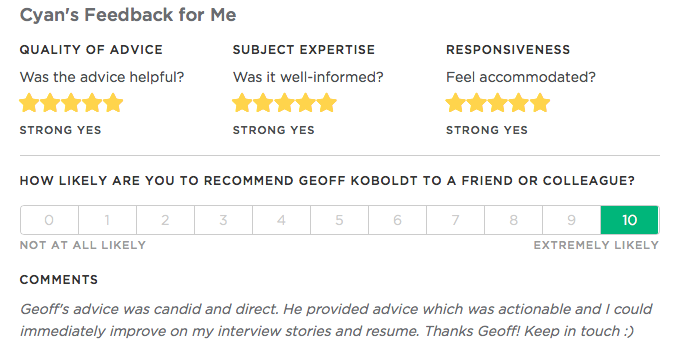 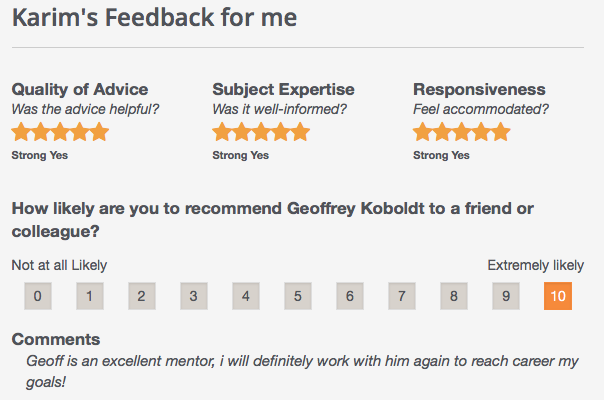 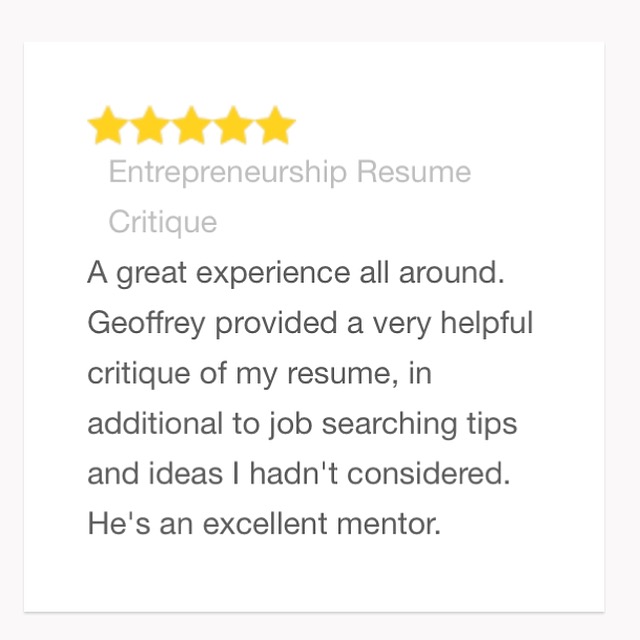 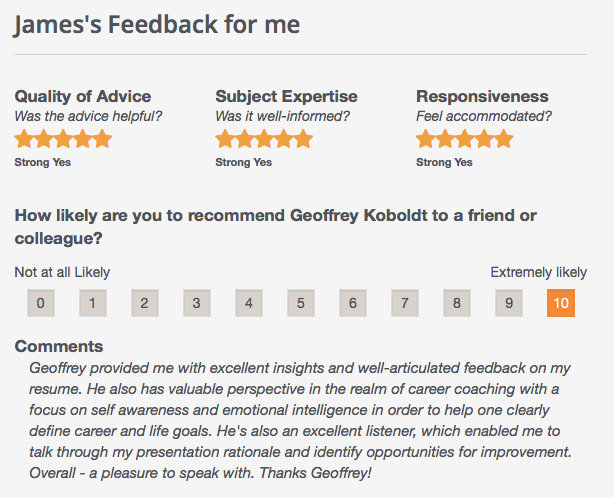 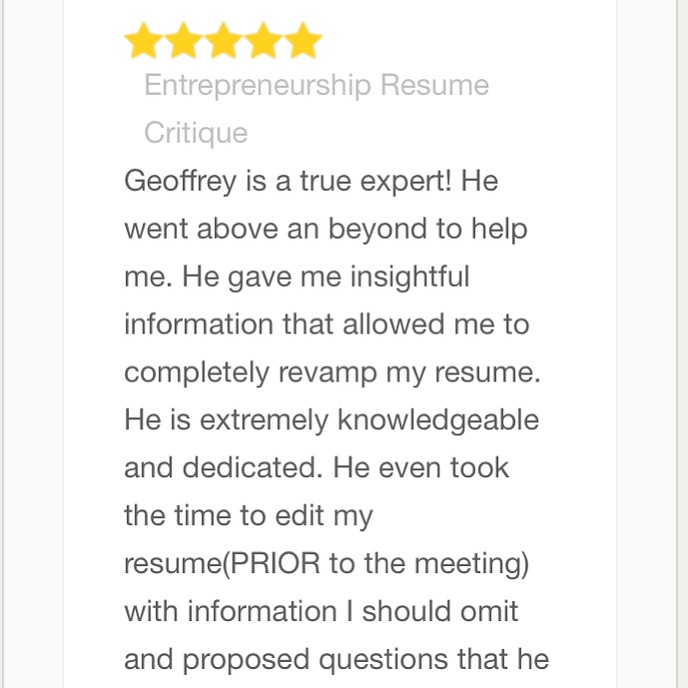 You must have a unique value proposition.

Results must be quantified with strong verb tenses.

Can I purchase ala carte services as needed?

Yes.  If you want something as simple as just a cover letter, we can accommodate.  Send a DM through Linkedin.

If we didn’t answer all of your questions, feel free to drop us a line anytime.

What Our Customers Are Saying

Don’t just take it from us, let our customers do the talking!